How many Giants does it take to change a lightbulb?

The Bristol Giants are delighted to announce that they have signed an exclusive, 10 year deal, with Gloucestershire County Cricket Club to change the lightbulbs of their new monster floodlights. 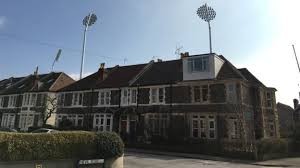 A spokesperson for the county ground commented, “Embarrassingly, we erected these new rather tall floodlights without thinking through what would happen when one of the bulbs blew. We have England coming to play at the ground later this Summer, and after the disappointment of a washout last time they visited, I’m not sure they would have appreciated us making them play in the dark this year!”

The floodlights have caused mixed reviews across the city, with one local four year old being left disappointed that they weren’t real space rockets.

“When they first arrived, I was really excited about going to the Moon to get Daddy some cheese, but it turns out they are just big torches.  My torch has got superheroes on it, so it is much cooler.”

At least the Bristol Giants are happy. Goram was unavailable for comment (something to do with an Easter chocolate eating binge that has left him feeling queasy), but Ghyston, 3,267, was beaming when we caught up with him.

“It is not easy finding work as a Giant and remaining hidden at the same time.  Thankfully this is a job we have to do with the lights off.  It is great to be of use and we can also rescue any cats that get stuck up there.”

Goram and Ghyston: The Bristol Giants

The Bristol Giants & the Severn Seas

The Bristol Giants Save Christmas